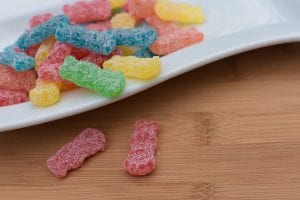 –  The guy who founded the Guinness brewery was Arthur Guinness . . . and he had 21 kids with his wife Olivia.  That’s not quite enough to be a Guinness world record, but it’s still incredible . . . mostly on her part.

–  Stanley Kubrick had his secretary type “All work and no play makes Jack a dull boy” over and over on 500 pieces of paper for “The Shining”, even though only a few of them were ever shown on camera.

–  Sour Patch Kids were originally called Mars Men.  They changed the name in the early ’80s to capitalize on the popularity of Cabbage Patch Kids.

–  NBC split itself into two radio networks in the 1920s and 1930s . . . Red for more expensive shows, and Blue for cheaper ones.  The FCC made them divide into separate companies in 1939 as TV was taking shape, and Blue became ABC.

– DRINKING BEER can almost DOUBLE a man’s chances of living until at least age 90, according to a new study.  And it increases women’s chances by about one-third.  The researchers say it’s just more proof that alcohol in moderation is good for your heart.  (Full Story)

–  More than HALF of hiring managers admit they’ve decided not to hire someone because of their appearance, according to a new survey.  The top reasons they reject someone are:  Visible tattoos . . . visible piercings . . . the way someone is dressed . . . and a hair color or style.  (Full Story)

–  There’s a video going viral on Twitter right now of a man’s spaghetti-eating hack:  He picks up pasta with his fork, then uses scissors in his left hand to CUT the long strands that are hanging down.  (Full Story)

–  There’s a Picasso painting called “Nature Morte” that’s currently being raffled off for a clean water charity.  The painting is valued at around $1.1 million.  And for 100 Euros, you can be entered for a chance to win it.  That’s about $108.  (Full Story)

–  A company in Japan has created SLICED MAYO.  There’s no word on whether it might make it over to the U.S.  (Full Story)

–  TWO drunk drivers both fell asleep in their cars in a McDonald’s drive-thru line in Michigan earlier this month.  The employees called the cops, who came and arrested both of them.  (Full Story)

–  A 29-year-old guy in Arizona decided to celebrate four months of sobriety . . . by getting drunk and stealing a motorcycle.  He’s facing charges for felony theft.  (Full Story)

–  A bar manager in Georgia hosted a contest on Valentine’s Day where she offered $500 to the couple that demonstrated the best LIVE SEX ACT.  She was arrested last week for violating two ordinances:  Providing entertainment with nudity and promoting a contest that encouraged sexual activity.  (Full Story)

–  A woman in Indianapolis had to deliver her own baby last week after her doctor couldn’t get to her on time.  Then three days later, she was on her way home from the hospital and helped pull a truck driver from a fiery wreck.  (Full Story)

NBC News Special Report: We now look to April 30 as an end date→